Visitors to Oahu, historians and fans of royals will enjoy the old-world elegance and Hawaiian spirit of Iolani Palace. The last residence of Hawaii’s royal leaders, King Kalakaua, and later, his sister, Queen Liliuokalani, has sustained a painstaking restoration (down to details such as research and reproduction of original fabrics). While the first and second floors present the living areas, the basement displays photos, Hawaiian crown jewels, high-chief regalia and decorations given by the monarchs.

This 10-room, four-story, Italian Renaissance house has the distinction of being the only royal residence to exist on American soil – and of being one of the first residences wired with electricity (beating both the White House and Buckingham Palace). Completed for King Kalakaua and his wife, Queen Kapiolani, the Iolani Palace offers even casual historians an unusual aspect of Hawaii's culture and past. After King Kalakaua’s death, Iolani Palace was occupied by his sister, Queen Liliuokalani. But the monarchy was overthrown under her brief reign, and Hawaiian royals lived here for only 11 years. The home remains, restored, to educate visitors and honor the monarchy’s history.

Allow about an hour to see everything, whether you choose the guided tour or the audio-enhanced, self-led tour. A few rules aid in the preservation of the home, designated a National Historic Landmark in 1962: Children under the age of 4 are not allowed on the first or second floor, though they are permitted on the basement level. Guests must wear cloth booties (provided) over their shoes to prevent scuffing the prized Koa wood floors. A longstanding ban on photography was lifted in September 2012 on the belief that social media would help increase interest and visitation.

Inside is the intricate beauty one expects – King Kalakaua was dubbed “The Merry Monarch” for his love of the arts and lavish entertaining. The home’s careful restoration, as well as the retrieval of many royal items once sold, reflects Kalakaua’s generous spirit. Note the grand staircase made of Koa wood. (The staircase was also made famous by Jack Lord in Hawaii Five-0, and many scenes from the series were filmed here.) Don’t miss the crimson and gold throne room, the crown jewels, the royal china – or the heart-wrenching Queen’s Quilt. Created by Queen Liliuokalani during her imprisonment in the home, the quilt marks an irretrievable shift in Hawaii’s direction and history. 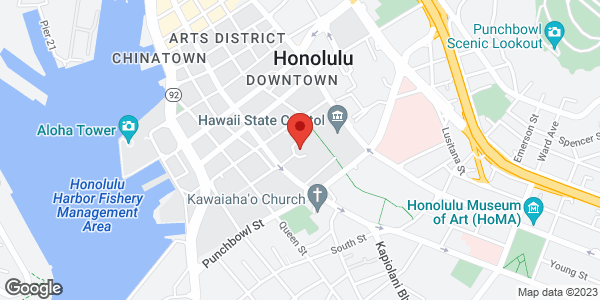 The Best Boutique Hotel In Hawaii.

Book Direct for the Lowest Rates, Every Time, no Hassels!